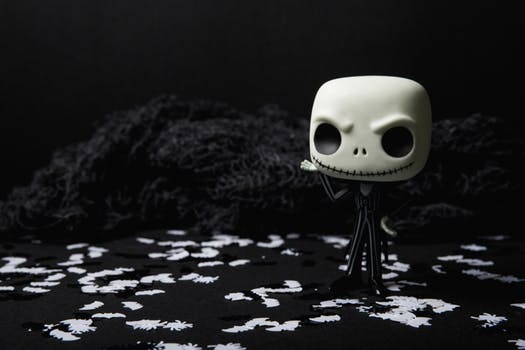 Halloween is quickly approaching, and what better thing to do but celebrate National Frankenstein Day while we eagerly await it!

Mary Wollstonecraft Shelley, in collaboration with her husband, Percy Shelley, wrote Frankenstein in 1818. It is arguably the first science fiction novel, so if that’s true, then she is the matriarch of Science Fiction!

Haven’t read Frankenstein yet? Check out a copy from the library:

Or watch the movie:

Domestic violence is a major issue in society. Many of the victims stay silent and unheard due to fear and stigma. It’s important to understand the depth of this problem and what we can do to help those experiencing it so for Domestic Violence Awareness Month we at Union University have compiled research and resources on domestic violence and other forms of abuse.

1 in 15 children are exposed to intimate partner violence each year, and 90% of these children are eyewitnesses to this violence. Any human being can be abused regardless of race, gender, size, age, mental capacity, or health, and that abuse can lead to significant health, emotional, and mental problems that last for years.

What: Domestic violence can display itself in a wide range of abuses including, but not limited to, physical abuse, emotional abuse, sexual abuse, financial abuse, and digital abuse. In many cases, the abuser often tries to mask their abusive behavior as something done out of love. Likewise, the victim can rationalize even violent behaviors thinking something along the lines of “it’s my fault because I made them angry,” “they are only like this when drunk,” or “they really aren’t a bad person.” The abuser may pretend to have the victims best interest at heart as a way to get them to relinquish some level of control of their resources or faculties. Some abusive behaviors are:

When: Domestic abuse can happen at any point during a lifetime or a relationship. Many times the abused aren’t even sure if the pain they feel is legitimate due to the denial, gas-lighting (a tactic used by abusers to deny memories and feelings of the abused in a way that puts the blame onto the victim), and general misleading of the abuser or even other people. If ANY of the above signs are applied to your situation, then you are being abused, regardless of the reasons the person gives for them.

Why: There are many reasons a person can abuse someone else but oftentimes that stems from certain common feelings or motivations. The abuser may not have been taught how to cope with injury or negative feelings while they were younger such as not making a team, being rejected by another person, or another similar experience. This lack of experience can keep them from developing healthy coping mechanisms when things do not go their way. The abuser can also have a sense of entitlement. In this way they believe that they have been embarrassed or do not like what their partner is saying, they are entitled to respond with anger or violence to make themselves feel better. Another reason for abusive behavior is a lack of healthy empathy. Many times, abusers can see into their partner’s shoes, but see their partner’s actions as based in malice against them instead of other things such as simple disagreement or fear. Many abusers have a lack of accountability. They hurt simply because they will not be affected by the outcome of their actions. Finally, abusers may have been victims in the past. Psychological evidence shows that if someone were to have suffered abuse in the past that they are significantly more likely to be come abusers in the future. None of these reasons validate abuse, but seeing the reasons behind why and abusers does what they do can be key in getting help.

What can I do: If you or a loved one is experiencing or showing signs of abuse, you should go to the authorities as soon as possible. Many times abuse can escalate, and by the time that happens it may be too late. If you need to call the police of medical services, be aware that you can ask for the sirens and lights to be turned of so as not to aggravate the aggressor. If you need help figuring out what to do you can call or visit the Domestic Violence Hotline’s website at http://www.thehotline.org/ .

**If you or a loved one is experiencing domestic abuse, you can also contact the Office of Counseling Services at Union. You have access to resources to aid you, and can make an appointment. 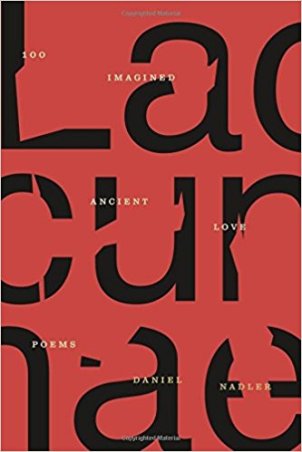 Ripening spots of white starlight onto our cold blue sphere,

you made the night reflect everything

in pools of water.

like a paddle returning to the surface of a lake.

But what does “lacunae” mean? As defined in the Oxford English Dictionary: “In a manuscript, an inscription, the text of an author: A hiatus, blank missing portion.”

With these new poems, Nadler intends to fill invented or actual lacunae in classical Indian manuscripts. These ancient writings were documented in 3 different languages- Sanskrit, Old Tamil, and Maharastri Prakrit- but Nadler’s poems use English instead. Each of the poems is fairly short, usually around just 2 stanzas, which aligns with their purpose of being “fill-ins.” Through these musings, Nadler explores imaginative, rich depths of feeling, with hints at a bigger plot unseen.

None of these poems are titled, so the table of contents records each lacuna as its first line. For example, the poem below is recorded as “A glacier glows pink.”

from the sun it encases

in its ice. This is what is told

For more about poet Daniel Nadler, read his enlightening interview with The Boston Review or his Poetry Foundation‘s biography.

Check out Lacunae in the library: you can view its availability here. 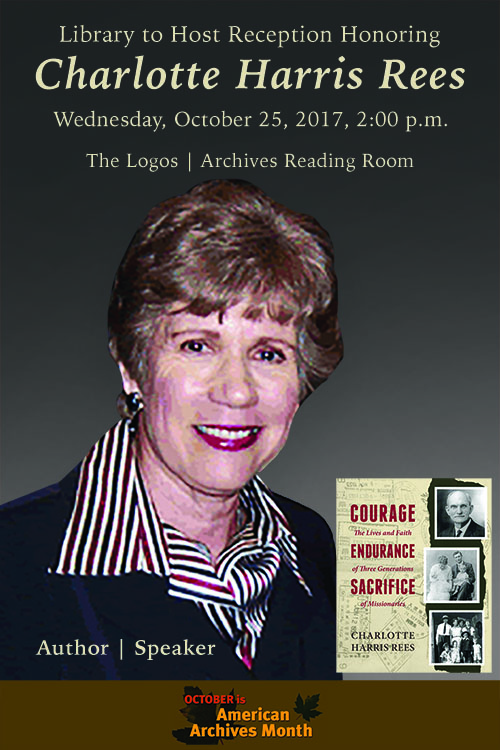 Did you know that October is American Archives month? The library is hosting a reception honoring Charlotte Harris Rees, author and archivist.

Come out to the Archives Reading Room at 2:00 p.m. on Wednesday, October 25th, on the third floor of the LOGOS to celebrate Charlotte!

Learn more about Charlotte and her work here.

Films On Demand is one of the library’s biggest and most entertaining resources. With over 26,000 titles, this database has everything from documentaries to feature films. It’s easy to access Films On Demand, since these videos can be streamed online from any computer or device. If you’re accessing library materials from home, be sure to enter your Union credentials to continue viewing.

Here are just a few of the many videos that Films On Demand has to offer:

Chris Milk: The Birth of Virtual Reality as an Art Form

Joshua Prager: Wisdom From Great Writers On Every Year of Life

Japan: Memoirs of a Secret Empire- The Way of the Samurai

The Truth About Personality

Whether you’re looking for source to include in your research paper, a short clip to show your class, or a fun movie to watch at home, Films On Demand has it all. Take advantage of this free, educational resource today!

It’s easy, fun, and you’ll leave with a full stomach!

Within the vast repositories of the world’s vernacular, vagarious,  floccinaucinihilipilificatious vocabulary, possibly of the sesquipedalian variety, fankle themselves into conversations and dictionaries everywhere. These words ensorcell us in a peculiarly effable fashion. The argute and Argus-eyed may avoid the argle-bargle of the anfractuous words displayed here. However, we permit them to absquatulate whilst we relish in the fact that only a jungli hoddy-noddy would call reading this article nugacity.

Borborygmus – a rumbling or gurgling noise in the intestines.

Cybersquatting – the practice of registering well-known names as Internet domain names, in the hope of reselling them at a profit.

Donkey Engine – a small auxiliary engine on a ship.

Entomophagy – the eating of insects, especially by people.

Floccinaucinihilipilification – the action or habit of estimating something as worthless (a word generally only quoted as a curiosity).

Galligaskins – a type of loose breeches worn in the 16th and 17th centuries.

Haruspex – a religious official in ancient Rome who inspected the entrails of sacrificial animals in order to foretell the future.

Lycanthropy – the supernatural transformation of a person into a wolf.

Pneumonoul­tramicrosc­opicsilico­volcanocon­iosis – an invented term said to mean ‘a lung disease caused by inhaling very fine ash and sand dust’, but rarely used except for its curiosity value.

Rebirthing – a form of therapy involving controlled breathing and intended to simulate the trauma of being born.

Spaghettification – the process by which (in some theories) an object would be stretched and ripped apart by gravitational forces on falling into a black hole.

Uroboros – a circular symbol depicting a snake (or a dragon) swallowing its tail, intended as an emblem of wholeness or infinity.

Belleity – a wish or inclination which is not strong enough to lead one to take action.

Wayzgoose – an annual summer party and outing that used to be held by a printing house for all its employees.

Yclept – by the name of.

Post by Ruth Duncan. Words taken from the Oxford Dictionary.

Are you a Union employee with a child or grandchild? Come join us for an Autumn Story Time at the library! 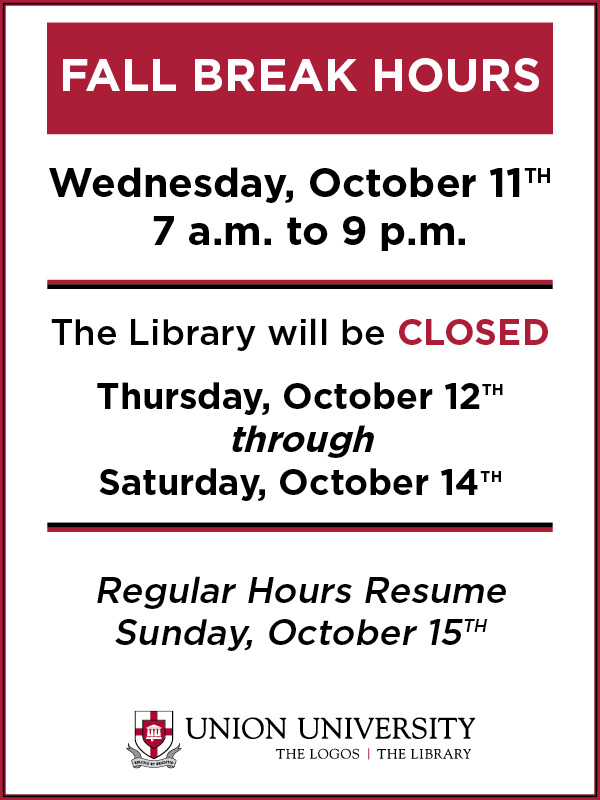 Top 5 Musicals On DVD At The Library