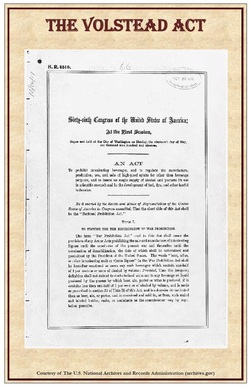 Matthew Beyer has begun a “Moments In History” series to raise awareness of important historical events. Each post will also have book recommendations about the moment in history, using our extensive history collection in the library.

Also known as the National Prohibition Act, the Volstead Act went into effect to enforce the Nineteenth Amendment, which banned the sale of alcohol in the United States.  This act came into being through the acts of the Temperance Movement, a largely female-led political and religious movement that sought to rid America of the temptations and suffering of alcohol dependency. While the good intentions of the Temperance Movement may have been noble in responding to debilitating effects of alcoholism on many Americans, it was none the less naïve to think that the federal government could successfully regulate and enforce such a law.

While there was general decline in alcohol use during the Prohibition era, it was also a time marked by widespread crime, corruption, and violence. This was highlighted by the creation of organized crime syndicates that soon began dotting the major American big cities. The creation of the Italian Mafia and other crime families quickly capitalized on the control and distribution of the illicit selling of alcohol. Illegal bars known as speakeasies began to pop up in many American cities and towns. Alcohol was smuggled in from other nations like Canada, Ireland, Cuba, and Mexico. The illegal production within the United States was often done locally in southern states in the form of whiskey and moonshine.

The attempts to enforce Prohibition led to the creation of the Bureau of Prohibition, a federalized agency that could act where local ineffective and often corrupt police agencies couldn’t or wouldn’t. The use of federal agencies to combat organized and inter-state crime would eventually evolve into the Federal Bureau of Investigations or F.B.I.

Eventually, popular opinion, as well as the states’ need for tax revenue, led to the repeal of Prohibition by the Twenty-First Amendment in 1935.

If you would like to learn more about this topic, the Union University Library has various books and media that cover this tumultuous time period:

Top 5 Family Movies At The Library