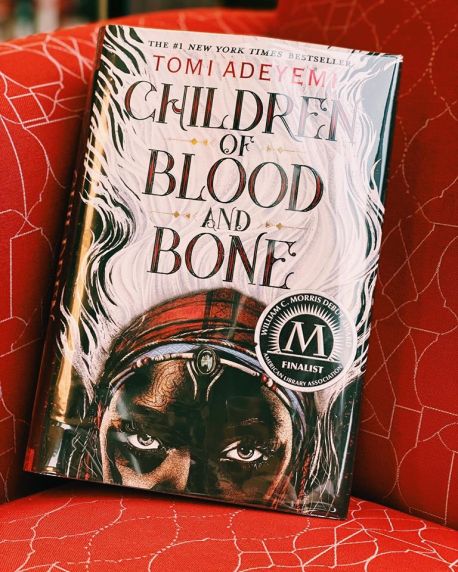 Children of Blood and Bone took the Young Adult book world by storm when it was published in 2018. For one thing, the cover is absolutely exquisite. For another, this is a fantasy book about people of color; diversity can be hard to find in the fantasy genre. Author Tomi Adeyemi uses her background as a Nigerian-American and her studies in West African mythology to create an intricate world with cultures and problems that real-life people can relate to.

This novel introduces us to two pairs of very different brothers and sisters: Zélie and Tzain, the underdogs in a society built on racism and the fear of magic; and Amari and Inan, the princess and prince who have everything but shrink under their cruel father’s abuse. As the four collide, and suppressed magic begins to make a comeback, their cities will never be the same again.

What Children of Blood and Bone gets right: I enjoyed reading about the complex, but ultimately loving, brother-sister relationships in this story, as well as each character’s development and growth throughout their journeys. The animals in this book are really cool as well. For example, Zélie has a lionaire (Nailah) whom she and her friends can actually ride like a horse.

Plot-wise, Children of Blood and Bone reminds me of Avatar: The Last Airbender. Zélie is a special girl who can bring magic back into the world, just like Aang is the avatar who can bring balance back to his world. And Zélie has wisdom beyond her years at times; her quote “I won’t let your ignorance silence my pain” gave me chills.

What Children of Blood and Bone gets wrong: There are a lot of rules and regulations about magic that don’t come out until later in the book. It can be difficult to keep up with, and some of it doesn’t fully make sense to me in regards to how it works in the story. And while the action scenes were exciting, they were hard to follow for me. I wasn’t too sure what was going on at times.

Although Zélie was the main character, I actually liked her the least out of the sibling pairs. While she means well and has a good cause, she’s constantly reckless. I wanted to see the story from Tzain’s perspective, as he was probably my favorite character due to his practicality and protectiveness, but we never got that.

Who should read Children of Blood and Bone: Fans of magic, fantasy, heroic stories, and West African mythology.

Who shouldn’t read Children of Blood and Bone: Readers who don’t enjoy fantasy.

Children of Blood and Bone is available in our Recreational Reading section. The sequel, Children of Virtue and Vengeance, is also available!

Most book reviews on this blog are written by Olivia Chin and reflect her personal opinions of the books, not the library’s view as a whole. 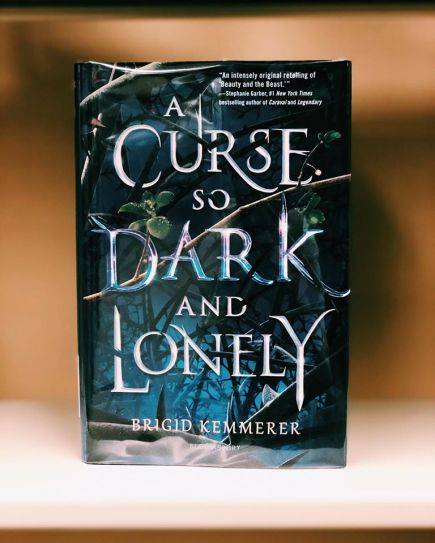 If you’ve been reading young adults books over the past few years, you’ll know that there are a plethora of fairy tale retellings out there. There’s nothing quite like taking a familiar story and turning it on its head for entertainment. A Curse So Dark And Lonely by Brigid Kemmerer is a well-written, fleshed-out Beauty and the Beast story.

What A Curse So Dark And Lonely gets right: This book provides an interesting look at the classic Beauty and the Beast tale, with several changes such as: more violence, more diverse characters and representation, and a fresh take on the beast’s curse.

The three main characters (Harper, Rhen, and Grey) develop strong bonds with each other over the course of the story. Each character has their own personality and voice, which I chalk up to solid writing.

What A Curse So Dark And Lonely gets wrong: I would love to see my favorite character, Grey, get some justice in the next book. He was, in my opinion, the most fleshed-out and likable character (although I liked Rhen and Harper just fine), and his cliffhanger ending was both exciting and disappointing.

There were definitely parts of the plot that I had to suspend a lot of disbelief on, but hey, it’s a YA fantasy novel. That’s par for the course. It got kind of crazy toward the end, but, to be fair, the author was setting up for another book!

One last thing: I don’t like the title. Just call it “The Curse” or something. There’s way too many nouns + two descriptors in titles these days; just look at Children of Blood and Bone,  A Court of Thorns and Roses, Days of Blood and Starlight, etc.

Who should read A Curse So Dark And Lonely: Fans of fairy-tale retellings, YA novels, and fantasy worlds in general.

Who shouldn’t read A Curse So Dark And Lonely: Readers who don’t enjoy fantasy.

A Curse So Dark And Lonely is available at the library. 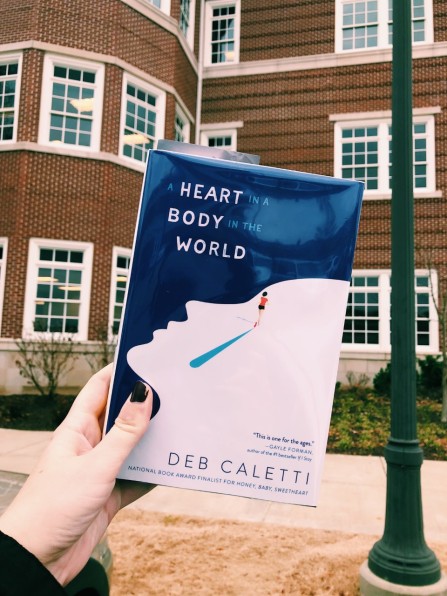 After completing my first marathon, I wanted to read a young adult (YA) book about running. I picked up A Heart In A Body In The World by Deb Caletti from the library’s Family Room. This novel is about much more than running (it has the major theme of dealing with a traumatic event) but running sets the framework for the main character, Annabelle, to begin the healing process.

Annabelle is a high school cross country runner who is in therapy and trying to deal with PTSD after a terrible event. On a whim, she decides to embark on a giant run from Seattle to Washington, D.C. Her grandfather helps her out, providing her with food and support from his RV. Soon her run turns into a cause, with hundreds around the country tuning in and showing support.

What A Heart In A Body In The World gets right: This has nothing do with the actual story, but wow, what a great cover!

As for the actual story: the hazards of running are really well described! When Annabelle freaked out in the shower because she hadn’t realized that she was chafed from her run, and the hot water was stinging her? That’s real, y’all . . . just take my word for it. And while she wishes for some Body Glide for chafing, let me tell you, that stuff only works some of the time.

It’s sad that recent, real-life events have made a novel like this so timely and necessary, but I’m glad that author Deb Caletti wasn’t afraid to tackle this kind of subject.

This book will show you the worst of humanity, but it also shows you the best of humanity: the surprising kindness of strangers, the willingness to support a good cause, and the love that a family has for each other. Annabelle’s story is both sobering and inspiring. It’s a story worth reading, even if you end up crying a little along the way.

What A Heart In A Body In The World does wrong: I personally am not the biggest fan of books that are written in present tense, so that took a little getting used to with this novel. I also wasn’t a huge fan of the “heart facts” that prefaced many of the chapters- they were interesting, but they took me out of the story.

Who should read A Heart In A Body In The World: Readers who enjoy running and young adult novels.

Who shouldn’t read A Heart In A Body In The World: While this book is certainly inspiring, it’s also very sad at times. If you’re looking for something more lighthearted to read, then pick up something different.

A Heart In A Body In The World is available in the library’s Family Room. 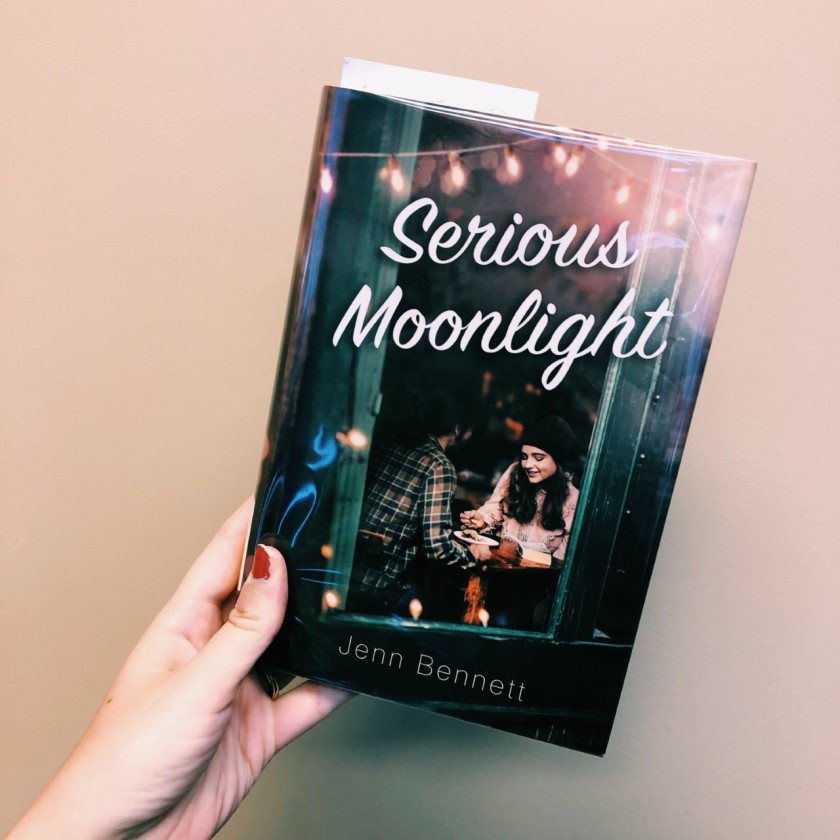 After I finished reading The Exorcist, I wanted to pick up something lighter- much lighter- to read. So I chose Jen Bennett’s Serious Moonlight, one of the library’s newer Young Adult novels. It has a very cozy cover, so it seemed like it would be a good read for a fall or winter afternoon. Literally, a patron that I helped at the Circulation Desk saw the book and commented: “That cover just looks like Christmas.”

Here’s a spoiler-free description of Serious Moonlight from the publisher: “Eighteen-year-old, mystery-loving Birdie’s new job at a historic Seattle hotel leads her and her co-worker, Daniel, to a real mystery about a reclusive writer who resides there.” I would say this book is more about restarting and repairing the relationship between Birdie and Daniel, though.

What Serious Moonlight does right: It’s cute. Birdie’s love interest, Daniel, is a sweetheart who loves David Bowie- which is a big qualification for a good literary romance. And even though Birdie pushes him away due to her fear of relationships, he still sticks around (which is okay rather than intrusive in this book, since they’re both nice and safe people). It’s a classic trope, but it’s one that works in this story.

Birdie and Daniel quote old noir/detective movies to each other. It’s weird and I don’t know of any teenagers who would do this, but again, it’s part of the book’s charm, just like the setting- Serious Moonlight makes Seattle seem smaller and more local than it really is.

Still, not everything is easy between Birdie and Daniel. Birdie worries that Daniel’s not telling her something (he’s not), and there’s a fair amount of natural miscommunications and missed signals between them. I appreciated these moments of realism (even as I wanted them to figure things out and end up together).

One last thing- if you’re into the Enneagram, this is a relationship between a 6 and a 7. It’s pretty entertaining how the two characters interact.

What Serious Moonlight gets wrong: Right off the bat I found out this was not going to be the completely innocent book I thought it would be. Let’s just say that Birdie has a surprise encounter in chapter one that I did not see coming based on her description of herself as “shy” and “sometimes cowardly.”  Later she has some more “encounters”-this book does earn the “Young Adult” sticker that we gave it.

There are also a few typos. This will bother some readers. And the plot’s kind of thin- this book is more focused on character growth than action.

Who should read Serious Moonlight: Readers who want a cute romance and a little bit of mystery. This would be a great book for an older teen or a young adult reader.

Who shouldn’t read Serious Moonlight: Readers who aren’t interested in romance/drama or would prefer a more chaste romance to read about.

Serious Moonlight is available in the library’s Family room.